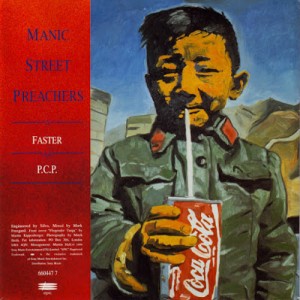 “I am stronger than Mensa, Miller and Mailer

I spat out Plath and Pinter…”

A fortnight ago, whilst working my penultimate shift on the counter at Piccadilly Records, I was rendered flustered and giggly by the sudden appearance of James Dean Bradfield and Nicky Wire from Manic Street Preachers. They were in Manchester, it transpired, to perform a secret gig at Night and Day Café. I haven’t listened to the Manics for years, but seeing them up close and personal in the record shop environment made me ponder the influence of their music on my teenage years.

When ‘Generation Terrorists’ first came out in 1992, I was still, at thirteen, an enthusiastic attendee of my local Free Methodist bible group. I was troubled by all the usual teenage questions about evolution, mortality and morality, and persuaded, for a time, by the adults around me, that the answers could be found, if not in the dense and bloody Old Testament, then certainly in the eminently accessible, and rather funky, New. When, one Sunday, my bible group leader – a not unlikeable lad in his early thirties – pulled out a copy of ‘Generation Terrorists’ and cited it as an example of all that was wrong and evil in the world, I felt spasms of both shame and excitement. My sister owned the record and we’d been playing it for weeks.

Trying to work out how you really feel about things as a teenager is like starring in your own complex and slightly hallucinogenic detective story. You pull in clues from all manner of sources, to compare, contrast, reject. You believe what you think you ought to until you can’t any more. On the one hand I had the fluffy platitudes of Psalm 23 (“The Lord is my shepherd, I shall not want. He makes me lie down in green pastures; he leads me beside still water”), which made Christianity sound like a really nice day out in the Lakes, and on the other I had the Sylvia Plath quotation from the back of the ‘Motorcycle Emptiness’ twelve inch: “I talk to God but the sky is empty” – a much more accurate description of what I was actually experiencing.

Thinking that Plath may be able to shed some light on the matter, I went to Waterstone’s one day and picked out ‘Ariel’, a slim volume – the only one I could afford – and immersed myself in it for weeks. Not the frothiest of reads, it has to be said. And not much help on the God front. But that’s what the Manics did. They forced you to investigate. Richey and Nicky spewed out reference points incoherently and indiscriminately, like cultural muck-spreaders, inviting their fans to work it out for themselves. It seemed like they were desperate to tell us something, but what?

Pre-internet it wasn’t easy to track down all those writers, those thinkers, those mysterious mind-shapers. Trips to the library were all part of the detective work: “Thus I progressed on the surface of life, in the realm of words, as it were, never in reality.” (Camus/’Love’s Sweet Exile’ sleeve.)

We got Henry Miller inside the ‘Generation Terrorists’ sleeve: “The tragedy of it is that nobody sees the look of desperation on my face. Thousands and thousands of us, and we’re passing one another without a look of recognition.” (I won’t forget reading ‘Quiet Days In Clichy’ under the duvet in a hurry.)

We got Marlon Brando: “The more sensitive you are, the more certain you are to be brutalised, develop scabs, never evolve. Never allow yourself to feel anything, because you always feel too much.” (‘Motorcycle Emptiness’ sleeve.)

We got Ballard: “I wanted to rub the human face in its own vomit and force it to look in the mirror.” (‘Mausoleum’ sample.)

The work of all of these people, and many more, became familiar to me through the Manics. Their music inspired my jubilant descent into atheism and its attendant vices – an experience entirely comparable, I suspect, to being born again, and one for which I shall forever be grateful.

In terms of actual songs, for me, ‘Faster’ is the Manics’ best – as lean as they ever sounded, stripped of the pop metal excesses of their previous albums, but still angry as fuck. The sample at the beginning is John Hurt in ‘1984’: “I hate purity, I hate goodness, I don’t want virtue to exist anywhere. I want everyone corrupt.” I love JDB’s guitar solo, which pops up unexpectedly in the last minute of the song, so waspish and wonky. In an interview, the band said they’d been listening to Magazine, Wire and Gang of Four. You can tell.

On June 9th 1994, the Manics opened Top Of The Pops with an incendiary performance of ‘Faster’. At the time they were wearing a lot of military gear, in tribute, they said, to The Clash. JDB was sporting a paramilitary-style balaclava with JAMES sewn on it. He looked like he’d been working out. Many viewers felt the band were aligning themselves with the IRA. The BBC received 25,000 complaints.

Four months later I saw the boys play Manchester Academy. They’d covered the venue in camouflage netting and were still in their army and navy shop fatigues. They came on to a ricocheting loop of the last phrase in ‘Faster’: “So damn easy to cave in! Man kills everything!” It was a powerful gig. Loud, mean, genuinely unsettling. Richey was there. Rake thin, of course, naked from the waist up, hanging over his upturned mike stand like the original James Dean in ‘Giant’.

Another four months on and he was gone, leaving behind a second ‘Holy Bible’ for me to pore over. With themes including prostitution, American consumerism, fascism, the Holocaust, self-starvation and suicide, it proved only slightly less punishing than the first.