This audio documentary was created to mark the 30th anniversary of Manchester’s anti-Clause 28 march, 1988. Attended by 20,000 people, the protest was a seminal moment in UK LGBT+ history. The piece seeks to evoke the sounds and emotions experienced on that day through interviews with marchers, fragments of archival material and music.

It was also conceived as a tribute to the LGBT+ activists who organised and took part in the demonstration.

The title comes from the chant, “we’re here, we’re queer and we’re not going shopping”.

Section 28 of that act stated:

(1) A local authority shall not:

This piece was commissioned by Manchester Pride and Superbia.  Special thanks to Greg Thorpe and all who contributed.

It forms part of the Queer Noise exhibition for MDMArchive:

Abigail Ward is a curator, musician and DJ. Her work explores the place at which music, politics and protest meet. For 10 years she has been documenting the history of LGBT+ music and club life in Greater Manchester through her digital heritage project, Queer Noise. She is a co-founder of Manchester Digital Music Archive.

In the early 90s, Manchester’s queer scene was blown wide open by the Hacienda’s seminal queer party, Flesh and its progenitor Number 1 Club on Central Street. Aided, or some would say ruined, by hit TV show Queer as Folk, the scene entered the national mainstream a few years later.

The film explores this history while revealing all about those carrying the torch of alternative rave culture in the new era, featuring collectives such as Homo Electric, Meat Free, Body Horror, and High Hoops. Each has a different approach and musical feel, drawing in different crowds, yet sharing the same vision. The film uses archive footage to highlight the continuum between Flesh and the parties that are happening today outside of Manchester’s city centre.

The release of the film marks the 30th anniversary of the enactment of Section 28. Section 28 was the last piece of homophobic law in the UK. It stated that councils should not “intentionally promote homosexuality or publish material with the intention of promoting homosexuality” in its schools or other areas of their work. Section 28 was enforced in 1988 before it was repealed in Scotland in 2000 and then 2003 in the rest of the UK.

Steffi, DJ and promoter for Meat Free in Manchester, says, “People are very honest up North, and big movements don’t always wash with the Northerners. We’re not about branding or excluding people. Sexual identity is not at the forefront of our parties.”

OUT! – An introduction to researching archives 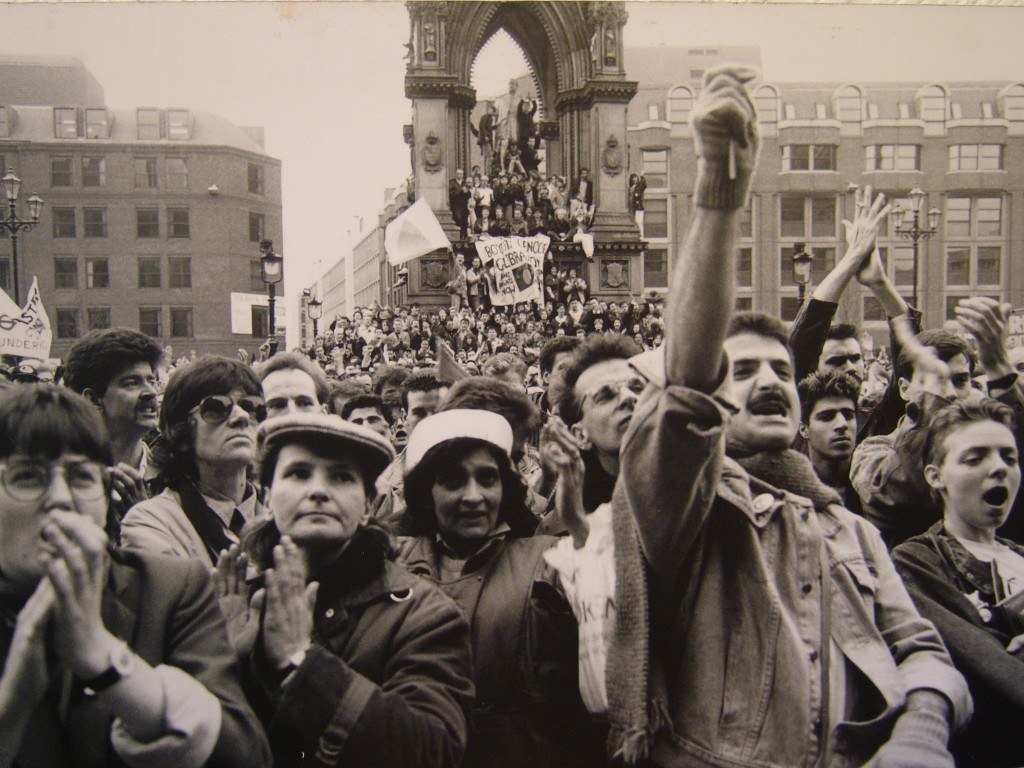 Image: Crowds of protesters at the Anti-Section 28 March, Manchester, 1988. Courtesy of Manchester Archives+.

Join Manchester Pride in the historic Chief Librarian’s room at Central Library for a fascinating training session on uncovering LGBT histories in Greater Manchester. Learn about viewing, handling and digitising rarely seen material held by a range of archives. Find out how you can contribute to the digital exhibition space at Archives+. This is a free, friendly event. All welcome!

OUT! is a project celebrating lesbian, gay, bisexual and transgender histories across Greater Manchester using digital technologies. It is funded by Heritage Lottery Fund and delivered by Manchester Pride.

This 3-hour training session, led by David Govier (Archives+) and Abigail Ward (Manchester District Music Archive), is aimed at equipping LGBT history enthusiasts with the skills required to interrogate archives and open up access to our city’s LGBT heritage, which, due to legislation and social stigma, has often remained hidden.

The session will be held in the beautiful, wood-panelled Chief Librarian’s Office, which also offers a top-floor vista of the bustling Oxford Road corridor.

Booking is via Eventbrite. Please note: places are limited, so we’d be grateful if you could let us know if you can’t attend.

We are proud to be part of Manchester Histories Festival 2016. 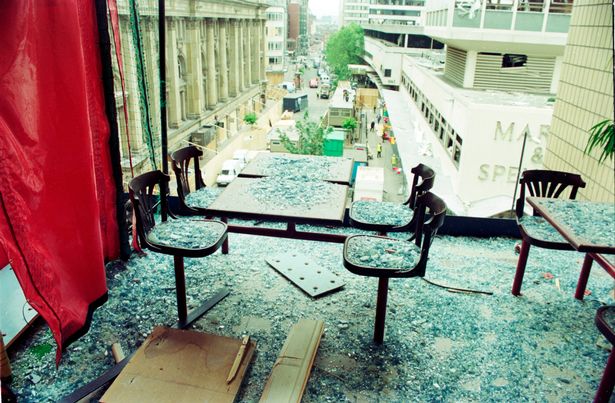 OUT! – An introduction to recording oral histories, June 2016 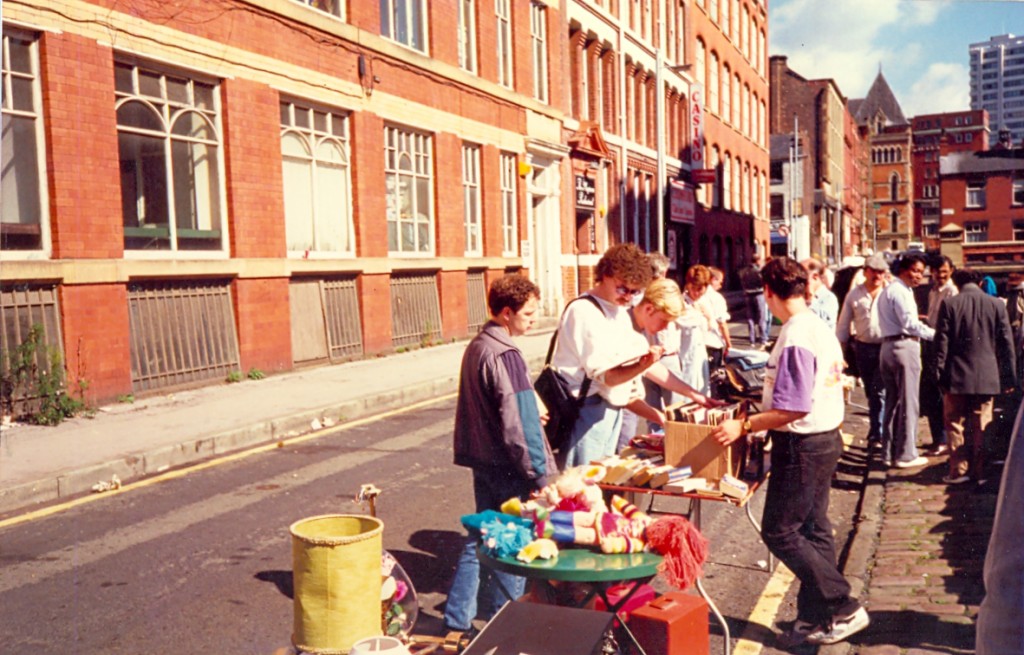 Jumble sale on Canal Street 1989 to raise money for those affected by HIV. Credit: Manchester Pride

Join Manchester Pride for a day of training on recording interviews and oral histories within the LGBT community. This event is part of OUT! – a Heritage Lottery-funded project exploring hidden LGBT histories in Greater Manchester. Learn how to capture spoken word recollections and preserve them for future generations. This is a free, friendly event and lunch will be provided. All welcome!

OUT! is a project celebrating lesbian, gay, bisexual and transgender histories across Greater Manchester using digital technologies. It is funded by Heritage Lottery Fund and delivered by Manchester Pride.

This event, led by Dr Fiona Cosson (MMU) and Abigail Ward (Manchester District Music Archive), will be a fun and friendly day aimed at equipping LGBT history enthusiasts with the skills required to record and preserve oral histories for future generations.

It will be of particular interest to members of the community who feel they would like to highlight elements of our city’s history, which, due to legislation and social stigma, have remained hidden.

Trainees will learn about best practice in oral history, interview techniques, use of mp3 recorders, basic audio editing and preparing files for submission to the sound archives held by Archives+ at Central Library.

Some recordings will be chosen to feature in the digital exhibition space at Archives+ and will also form part of the OUT! online portal to be launched in June.

We are excited to be hosting the event in the International Anthony Burgess Foundation – a beautiful library, archive and study centre just a few minutes from Oxford Road railway station.

Booking is via Eventbrite.

Please note: places are limited, so we’d be grateful if you could let us know if you can’t attend. 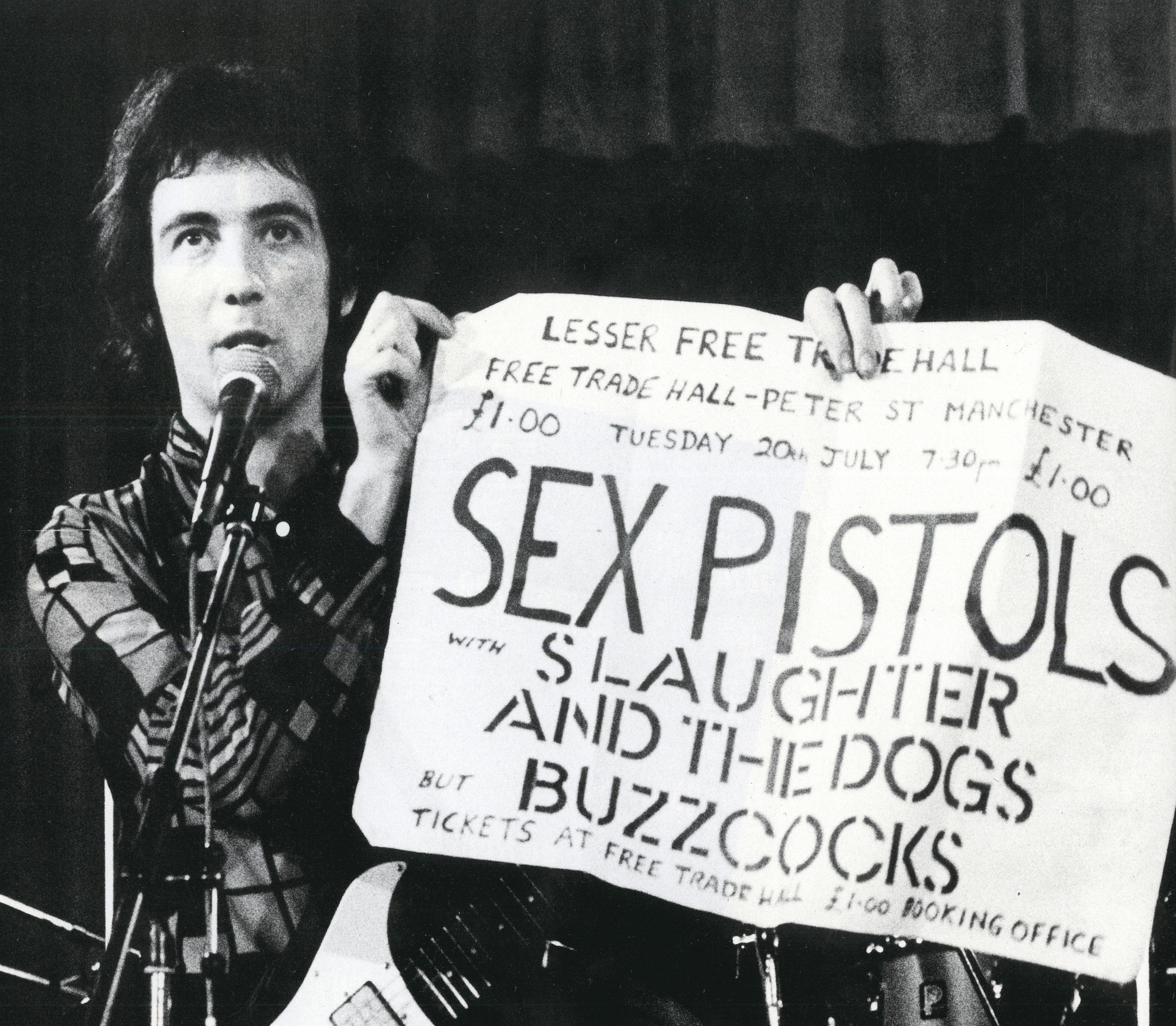 In late 2009 I acquired a small amount of funding to develop ‘Queer Noise’ – an online exhibition for Manchester District Music Archive that aimed to lift the lid on LGBT music-making and club life in Greater Manchester from the sixties to the present day. The exhibition would harness and contextualise scanned ephemera, such as posters, flyers, photos and press articles uploaded to MDMArchive by members of public all over the world, in addition to my own collection of artefacts, which I had been digitising for a number of years.

Launched in 2010, ‘Queer Noise’ now contains over two hundred chronologically ordered images and written recollections, and continues to grow as more and more people share their memories. A selection of these artefacts will form the basis of my short presentation to the LGBT History Festival in February.

In my talk for  I will be examining three key points in the city’s LGBT music history: the birth of punk in 1976; the house music explosion of the early 90s: and the alt-gay scene which developed a decade later as a response to the homogeneity of the music on offer on Canal Street (Manchester’s gay village).

In the summer of 1976, punk hit Manchester following the Sex Pistols’ pivotal brace of gigs at the Lesser Free Trade Hall. Misunderstood by many as an aggressive, negative force, the early punk scene in Manchester celebrated difference; fostered a DIY approach to creativity and self-expression; and created a tightly knit music community, which (for the most part) welcomed LGBT young people. Pete Shelley of Buzzcocks, who co-promoted the Pistols’ second gig, was openly bisexual and sang about romantic experiences with both men and women in a very straightforward way. But ‘76 was also the year in which James Anderton began his tenure as Chief Constable, marking the beginning of a sustained period of harassment of Manchester’s LGBT community by police. Punk historian Jon Savage said of this time, ‘Manchester felt under lock-down then: if you were out late at night, you’d get stopped at least twice a week. It wasn’t just gay people, it was anyone who looked and acted different.’

Fast forward to 1990 and we see the launch of Manto on Canal Street – a sophisticated European-style bar that deliberately flouted the prevailing ‘behind closed doors’ culture of gay venues by installing full height plate glass windows. Thanks to DJ Tim Lennox, house music took hold at Central Street’s gay-friendly Number 1 Club, which in turn led to the birth of Flesh at the Haçienda – a wildly successfully Ecstasy-fuelled house and garage night flagrantly billed as ‘Serious Pleasure for Dykes and Queers’. It was during this time that the city was dubbed ‘Gaychester’, the first Mardi Gras happened, Canal Street boomed and Manchester City Council truly cottoned on to the potential of the pink pound.

Flesh lasted until 1996, spawning many copycat club nights and, along with the Number 1 Club and Paradise Factory, was responsible for the making house music the dominant sound of ‘Gaychester’. But by 1998, some of the same DJs, promoters and club goers that had inspired the house boom were growing tired of the commercialisation of both the scene and the music. At this point, LGBT club nights boasting a more eclectic soundtrack spanning funk, soul, disco, hip hop and indie began to emerge. Club Brenda and Homo Electric were at the forefront of this movement. Like the punk scene that had come before, these clubs celebrated difference, with flyers boasting slogans such as ‘Music is life, gym is the coffin, be ugly‘.

As well as flyers, posters, gig tickets and photos, my presentation will include some unseen footage of Manchester’s gay clubs, plus excerpts of oral histories captured exclusively for the festival.

If you would like to add any artefacts or recollections to the Queer Noise online exhibition, please register to become a member of Manchester District Music Archive here and start sharing your history. Alternatively, you can email: info@mdmarchive.co.uk.